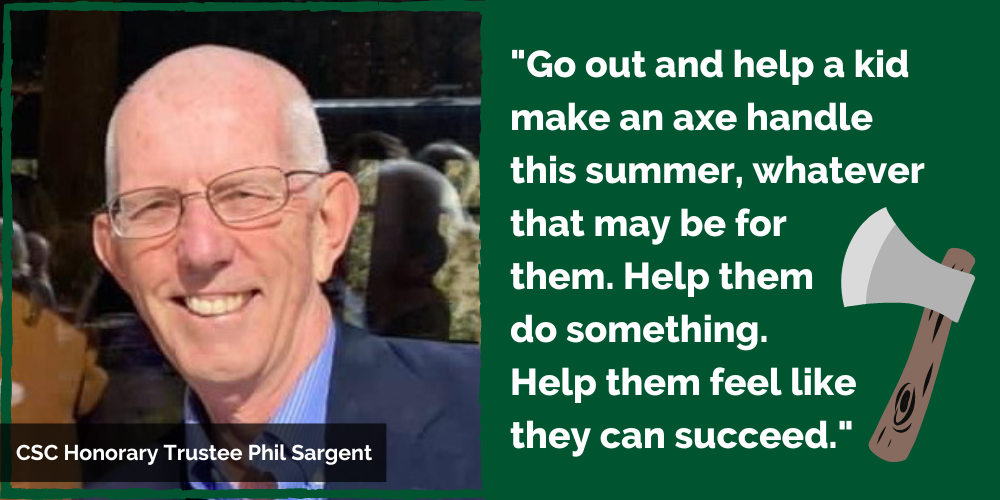 Phil Sargent was first introduced to Camp Susan Curtis through the Annual Leadership Celebration Dinner. His boss at the time invited him to attend. As Phil puts it: “My wife Cindy and I sat there and listened to the program. And I said, I’ve got an old debt to pay back.”

In fact, Phil has a lot in common with many of the kids who attend Camp Susan Curtis. When he was seven, his father passed away as his mother recovered from a long battle with tuberculosis. He was the youngest of three children. His mother worked as a public health nurse and struggled to support them all as a single parent.

But just before his ninth birthday, something remarkable happened. His mother got a call, asking her if her son would like to attend Camp Morgan, a YMCA camp based in Washington, New Hampshire.

“They said a scholarship had been donated in my name anonymously,” Phil said. “So when I was nine I started going to Camp Morgan. I went there for nine years. I became a counselor when I was seventeen. And it had a tremendous impact on my life. The whole experience. That was the debt I needed to pay back.”

“It had a tremendous impact on my life.
The whole experience. That was the debt
I needed to pay back.”

Phil has now been involved with Camp Susan Curtis for 29 years. As one of our longest continuous supporters, Phil has more than paid back his debt — and changed many young lives in the process.

After that first dinner, he and Cindy immediately started donating camperships for Maine kids in need to attend camp. He served on the Board of Trustees for sixteen years, including a term as Board Chair. And after rolling off the board, he has continued to serve as an Honorary Trustee, participating on committees to select the camp’s insurance brokerage firm, and hire new Camp Directors and Executive Directors, continuing to play a direct and meaningful role in the future of Camp Susan Curtis. And all the while, more than anything, Phil has been a dedicated and tireless advocate for the impact of camp.

“For a while, I used to go up to Camp Susan Curtis and do an orientation with the staff and tell my story,” Phil said. “I would always talk about an experience when I was 13. One of the things that we did at camp was go out into the woods and cut down trees, drag them back, take the bark off with a spokeshave, and the logs would be used to build new cabins. So that year, I had to buy an axe. But one of the first trips into the woods, I broke the axe handle. So I went down to my counselor’s tent, almost in tears, because I knew we couldn’t afford five bucks for another axe. But he said, don’t worry, we’ll fix this.”

And they did. Phil was close to his counselor, Henry Perley, who was also known as Chief Henry Red Eagle and was a member of the Algonquin Maliseet indigenous people. He was a well-known performer, writer, and wilderness guide. But at camp, everyone just called him Hank. With Hank’s help, Phil cut down a small ash tree and used a section of the tree to shape a new handle for his axe.

“I still have the axe. It’s had a couple of handles. But what I used to say to staff at the end of the story was to go out and help a kid make an axe handle this summer, whatever that may be for them. Help them do something. Help them feel like they can succeed.”

Throughout his many years of support, Phil has always remained cognizant of the fact that, if it had existed at the time, he might have been a Camp Susan Curtis camper. His mother wouldn’t have been able to afford to send him to summer camp if not for the remarkable generosity of someone who recognized the benefits of a camp experience for a young child and made sure they were able to access it. And Camp Susan Curtis is so lucky to have gained the support and perspective of someone like Phil, who knows first-hand how transformative a camp experience can be.

“I know what the results can be from what I am doing. If we can serve one kid, then it’s worth it.”

Phil is thankful for the foresight and vision of the camp founders, who also recognized the life-changing power of a camp experience. In advocating for Camp Susan Curtis, Phil often recounts what he has been told about the discussions surrounding the camp’s founding: “The State of Maine is known for having some of the best camps in the United States. Kids come from all over the world come to go to camp in Maine,” Phil said. “But we have a huge population here that can’t afford to access that resource. Why don’t we do something about providing that resource to kids in Maine that couldn’t do it otherwise?”

For nearly 30 years, Phil has been dedicated to making sure that kids in need from all over Maine can access a transformative camp experience, just like he did. When asked about how his long-term support for Camp Susan Curtis makes him feel, Phil is pretty clear: “I feel pride that I am contributing. And I feel joy. Because I know what the results can be from what I am doing. If we can serve one kid, then it’s worth it.”

Do you have a favorite book? Anyone who loves to r

We wanted to take a moment to share our gratitude

Allyson Gilbert has held many roles on the Camp Le

A couple weeks ago, we asked you all to share some

CAMP POLL: On the third day of camp, campers help

We are incredibly grateful to @wex_fleet for helpi

Megan LaCroix had always heard about CSC growing u

“Something I learned from camp this year is one, to be more mature so I can be the best role model possible for younger campers. Another thing I learned was to use my voice more and to be less shy, this will help me in the future by being able to speak up not only for myself but for my friends and people who need someone to speak up for them.”